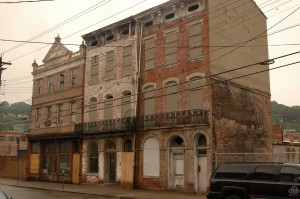 Over-the-Rhine is an old, historic neighborhood in Cincinnati, Ohio, with some amazing architecture, that has been driven down by economic pressures for the last several decades.

A group of young architects, City Studios Architecture is taking on the restoration of these buildings. To do this, they’ve tapped into some general contractors; builders and developers who have identified financial resources that provided seed money (Section 8 housing, block grants, economic development funds) for this project. The overall goal is to rehabilitate and save the buildings while honoring the traditional workmanship and design. This must be done in a way which is cost effective, durable, and creates a building which is affordable to operate.

City Studios was faced with many physical challenges.  For example, many of the buildings are row houses that were built around 1900.  In some cases, the middle building has been compromised and needs to be leveled which leaves the other buildings with what was an interior dividing wall that is now an exterior wall. Now you have the challenge of weatherizing these walls.

One of CertainTeed’s customers had called on City Studio as a new firm. What he found were eager, young architects with a great project and lots of questions.  This customer had worked with me on some projects in the past and called to see if I could help them out. Their questions were not just idle chit-chat, they were complex issues. I did some computer models and simulations and sent them the results with some explanation. As a result, they asked if we could meet. I was able to meet with them and their general contractor, The Model Group, while on another assignment in Ohio.

As this dynamic group of young architects moves forward with this monumental undertaking, some of the preferred solutions to individual issues may lie outside of CertainTeed’s product offerings. In those cases, I have been reaching out to my Building Science colleagues in complimentary product lines to lend their expertise. This is becoming more of a team project and an exciting one at that.

Bottom line: City Studio Architecture is off and running. They are restoring old buildings and building new in-fill construction to complement the existing structures.  They are creating jobs and are working on interesting projects which in these economic times is a great thing for young architects.

It’s not the biggest thing in the world but it’s what Cincinnati is doing to improve their own backyard and could be a model for other communities.  It’s a great thing and I will be following and reporting their progress in other blogs.