Maybe we need to put our lifestyles on a diet. We see seniors doing this when they downsize into the last home they will own. Controlling expenses in the face of a fixed income is often the motivation necessary to make that move. Suppose you were faced with a fixed energy income. Would you be prepared to make the changes needed to live within those constraints?

The Copenhagen Conference is drawing attention from many sources; some positive – and some not so positive. Let’s look at a couple of positive concepts.

On Tuesday, December 15, CBS News posted a story from correspondent Elizabeth Palmer on The Quest for “2,000 Watt” Living. Zurich, Switzerland has proposed a challenge to its residents to consume no more than 2,000 watts every minute of every hour of every day.  This concept originated with a group of Swiss architects and engineers who did a rough calculation back in the 1990s to determine the amount of energy being used on the Earth each day and divided that by the number of people on the planet. The result of the calculation was 2,000 watts.

According to Palmer’s article, data shows that just about everyone in the developed world uses far more than 2,000 watts – the European average was 6,000 watts and the American average was 12,000 watts.

While some residents of Zurich try to live within 2,000 watts no one has managed to achieve that goal.  Most report that flying anywhere immediately blows the energy budget. I discovered the same problem when I calculated my own carbon footprint. 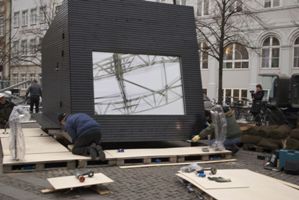 Another example of positive energy initiatives at the Copenhagen Summit is the Saint-Gobain Playhouse in the center of downtown Copenhagen. Saint-Gobain, CertainTeed’s parent company has constructed this low energy-consuming children’s playhouse/garden house that will be on display for visitors until December 18. The cube-shaped playhouse is built using all the energy-saving solutions of Saint-Gobain Scanglas, Isover, Gyproc, Weber, Ecophon, Saint-Gobain Glass, and Vetrotech. The house is so perfectly insulated that it can be heated with a handful of candle sticks.

The house is part of Saint-Gobain’s new, global Habitat strategy to be the world leader in supplying materials to sustainable buildings in areas focusing on energy efficiency, comfort, aesthetics, and environmental friendliness. CertainTeed, a subsidiary of Saint-Gobain, fully embraces this concept as well.

Too bad each of us can’t fit inside, yet!

There were many examples of sustainable concepts that were featured in the news this week.  What were your favorites?