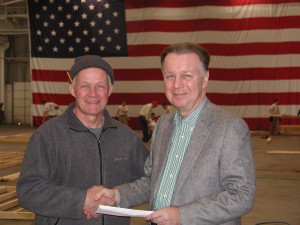 If I could go retro on you for a moment—about 10 years ago I got a call asking for a donation of building products to a Habitat for Humanity Easter Build in Georgia.  “No problem,” I said.  CertainTeed has always given to Habitat and is a firm believer in its goal of building affordable housing for people.

Not long after I get a call from this very nice woman who identifies herself as the secretary for former President Jimmy Carter, who by the way has been a major supporter of Habitat for decades.  She was confirming our donation.  The next thing I know, she asks me to hold for the President!  After about 10 seconds of shock, I stumbled to myself as to what to call him.  After all, it’s not everyday you get to talk to a former US president!

The bottom line is, (by the way, I referred to him as Mr. President), an event I attended this week benefitting Habitat, reminded me of my brief encounter with the “peanut farmer from Plains.”  But, it also struck me, that despite these grueling economic times, there are still people out there, builders as a matter of fact, who are helping the less fortunate.

Case in point:  fast forward to present day in a small suburb of Philadelphia where a wonderful event took place.  The 4th annual Builders’ Competition brought together builders from across the region to see who could build a framing package for a 1200-square-foot home in the shortest time.

Nine teams of 10-12 artisans, professionals and weekend warriors participated in this two-day event.  John McClintick, a painter by trade, started this event in 2006 at the height of the building boom with five teams.  But, this year, in a down economy, he nearly doubled the team participation for the event.  Why?  “This competition allows these contractors to showcase their skills in service to a great cause,” said McClintick. “Unlike other competitions this one appeals to human nature, being of service to others, with the fruits of their labor being nine framing packages that will benefit Habitat for Humanity families in Delaware and Pennsylvania.”

Unbelievable!  In a time when housing starts have dropped from over two million a few years ago, to barely 500,000 last year, these men and women gave their time, gratis, to help less fortunate families.

It doesn’t end there. Most of the teams volunteer to complete the build-outs of the homes they have framed even if it means traveling to Delaware or New Jersey from as far away as Lancaster, Pennsylvania.

The winning team receives the Devon Builders’ Cup to keep until the next competition as a reminder of the outstanding service they have provided.  But the biggest reward is sharing their skills for the benefit of others whom they may never meet but who will benefit greatly from their labor. That is inspiring.

Since its inception, the Builders’ Competition has participated in the construction of 15 homes (and soon another nine), eight of which were sent to Habitat for Humanity Baton Rouge on the Hurricane Katrina-ravaged Gulf Coast.

CertainTeed salutes John McClintick and all the teams for their efforts.