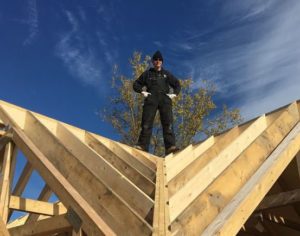 I went to school for three years for business but I realized I didn’t want to sit at a desk. It just wasn’t for me. I had a buddy who was in the trades. He mentioned that the guy he worked for was looking for help framing homes. It was the middle of winter – the worst time to start – but I thought why not?

After a couple years working as a framer, my wife and I were ready to buy a house. At the time the housing market in Ontario was going crazy; a house would go on the market and sell in the same day. That’s when a piece of property became available down the street from where I grew up and we thought, “Let’s build a house!”

Since I had framing experience I thought I’d start with that and research pricing for everything else – that’s when I decided I was going to it all myself.

We broke ground May 14, 2017 and I’ve been at it 7 days a week since. I’ve learned more in the past year and half than I would have learned in five years of school. I don’t have the choice of, “I don’t how to do that,” if I’m not going to do it, no one will.

When our home is built I’m going to stay in the trades. My dream would be to continue building homes from the ground up and selling them, maybe becoming a general contractor or working for a builder.

The Importance of Craftsmanship

Framing is actually my favorite part, it’s the most visually satisfying part to see it finished. Second to framing, I’d say putting on the siding is my favorite. Every day you can see a huge change.

Your workmanship is so important. There are so many homes that are slapped up that you set yourself apart by the quality of your work.

Inspiring the Next Generation of Tradesmen and Women

My advice would be that you might not figure it out right away, but try something. It won’t be the end you – you can always make a change. When I was in school I didn’t really know what I wanted to do and I feel like a lot of people are in that boat right now. I didn’t find out what I was truly passionate about until I was 25.

For an average kid, if their mom or dad doesn’t have experience with tools they’ll never be introduced to them. You get taught science, math and English but not every kid is going to be an English teacher or a mathematician. There are kids who would thrive at the trades. I’ve seen buddies of mine who are so successful in the trades but were really unsuccessful in school. Consider introducing carpentry while teaching math and giving hands experience.

Thanks, Joel (and good luck with your build!)

Are you employed in the trades? Help us combat the image problem and share your story. We know there are a lot of talented people in the trades and we think it’s about time everyone else did too.

For more information on how we support those in the trades and what you can do to help, check out our Keep Craft Alive initiatives.