Located approximately 30-miles outside of Philadelphia, East Whiteland Township is in the center of Chester County. The township building is typical of local government, a combination of office spaces and meeting facilities in a relatively no-frills municipal building.

It does have one space, its main meeting space, that stands out. It is a large open room with a vaulted, wood plank ceiling and a series of windows lining the side wall and overlooking a wooded area below. The community is proud of this main room; they even splurged on a fancy new lighting system.

It is in this main meeting room where the community conducts business. Elected officials meet and community members gather to voice their concerns and provide feedback on how things are going. In a building short on space, it can also serve as a makeshift conference room for township employees. (The township’s human resources director was conducting an interview there the day I arrived for a tour.)

This room, much like the building itself, was last updated in the late 1970s and suffers from several common acoustical problems. There are sound reverberations, echoes and inadequate sound transfer. Thanks to the vaulted ceilings when speakers present their voices ricochet around the room making them hard to hear and understand. Things are worse when they try to use video, but despite the acoustical challenges the exposed wood ceiling is popular among residents and there is little support for covering it up.

The room was in need of some out-of-the-box, or rather, in-the-box solutions.

The East Whiteland Township meeting room before the cloud installation.

Fortunately, less than a mile down the road was a building products’ manufacturer in the midst of a renovation project of its own. (Spoiler alert: That would be us.)

“I first noticed the acoustical issues when we began attending Township planning meetings to present the blueprints for the new Corporate Headquarters’ building,” said Tamara Alvarez, Manager of Commercial Building Development for CertainTeed, “and I just thought, I bet we can help here.”

Mueller referred the problem to CertainTeed’s Acoustical Ceilings’ dream team – Building Scientists Stan Gatland and Bob Marshall. Gatland is a mechanical engineer with over 25 years of experience and expertise in architectural acoustics while, Marshall is an expert in commercial ceiling construction.

The challenge: Minimize the acoustical issues without the need of a full room renovation and install the solution in 48 hours so as to disrupt as little as possible the normal flow of business.

The team went to work conducting a variety of acoustical tests.

“First,” said Gatland, “we needed to gather data on a couple of key points.”

Specifically, they were looking to demonstrate improvement on two common acoustical measures:

Using a combination of technical measurement devices and basic mathematical calculations, Gatland and Marshall determined the values that would serve as the baselines for the project. 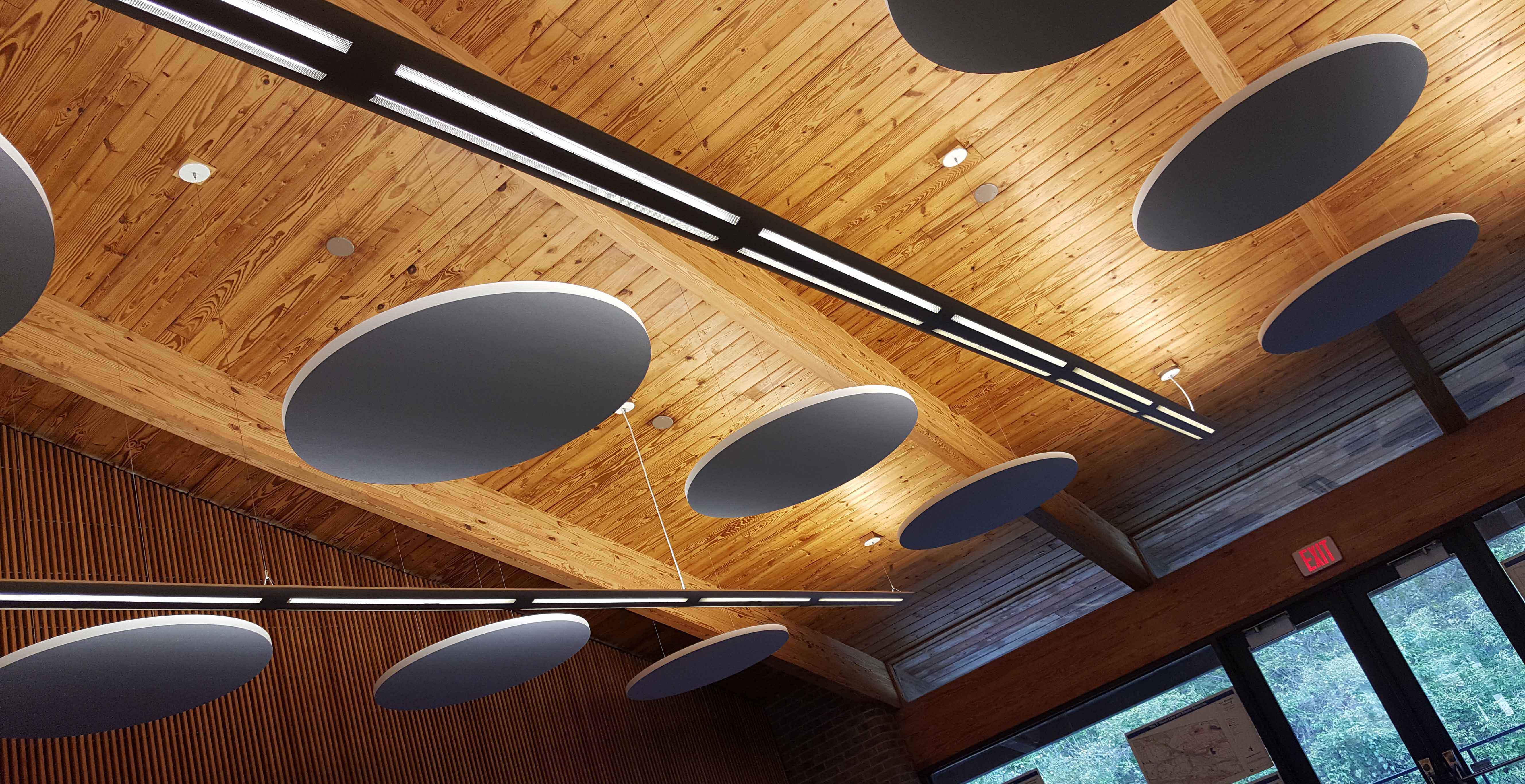 The clouds offered an added bonus of a highly engineered, white surface against which would help reflect existing lighting throughout the room.

A fully absorbing drop ceiling could be installed in the room and it would have dramatically cut back on reverberation and sound travel but it would have also covered up the beloved wood-beam ceiling.

“One of the big concerns for the township was maintaining the aesthetics of the space,” explained Marshall.

There was also little interest in a full renovation and they wanted to make sure the solution did not interfere with the lighting of the space.

Since a massive renovation was out of the picture the team designed a way to attack the sound concerns, including reverberation time, passively by installing absorbers.

Reverberation time, which is directly impacted by the surface area of sound-absorbing materials in the space, sees the greatest improvements when a full drop ceiling is installed.

“However,” Gatland explains, “properly placed clouds can absorb a signiﬁcant amount of sound with less surface area than suspended ceilings because they absorb sound from both sides.”

The absorbers capture sounds on all surface areas not just those facing the ground so a hypothetical 4′ x 4′ cloud delivers 32 square feet of sound absorbing surface area.

Adding lowered clouds absorbers directly above the meeting attendees should dramatically reduce the overall noise level and sound propagation in the room. The key would be getting the absorbers into the space of the room without disturbing the lights – the closer to the origin of the sound, the better. A 16 square foot absorber installed 40 inches from the ceiling absorbs 15 percent more sound than one installed eight inches from the ceiling.

“Kind of genius,” added Marshall of the team’s decision to use a circular shape for the clouds.

The original design called for rectangular panels which would have been hard to keep in crisp grid lines against the angular slope of the ceiling. The circular shapes offered a comparative level of sound absorption while masking slight linear imperfections of the install.

The install, however, still needed to be precise, Marshall and Gatland provided the installers a detailed schematic including exact spacing for the clouds.

To make sure the placements were properly spaced along the slanted surface of the vaulted ceiling the installers laid the clouds on the floor and used a laser pointer to mark the precise location on the ceiling. The clouds were then suspended from the ceiling using a proprietary hanging system that quickens the installation and leaves the owner with wires that are barely visible.

In the end, sixteen circular clouds were hung above the lights but as low down from the vaulted ceiling as possible. 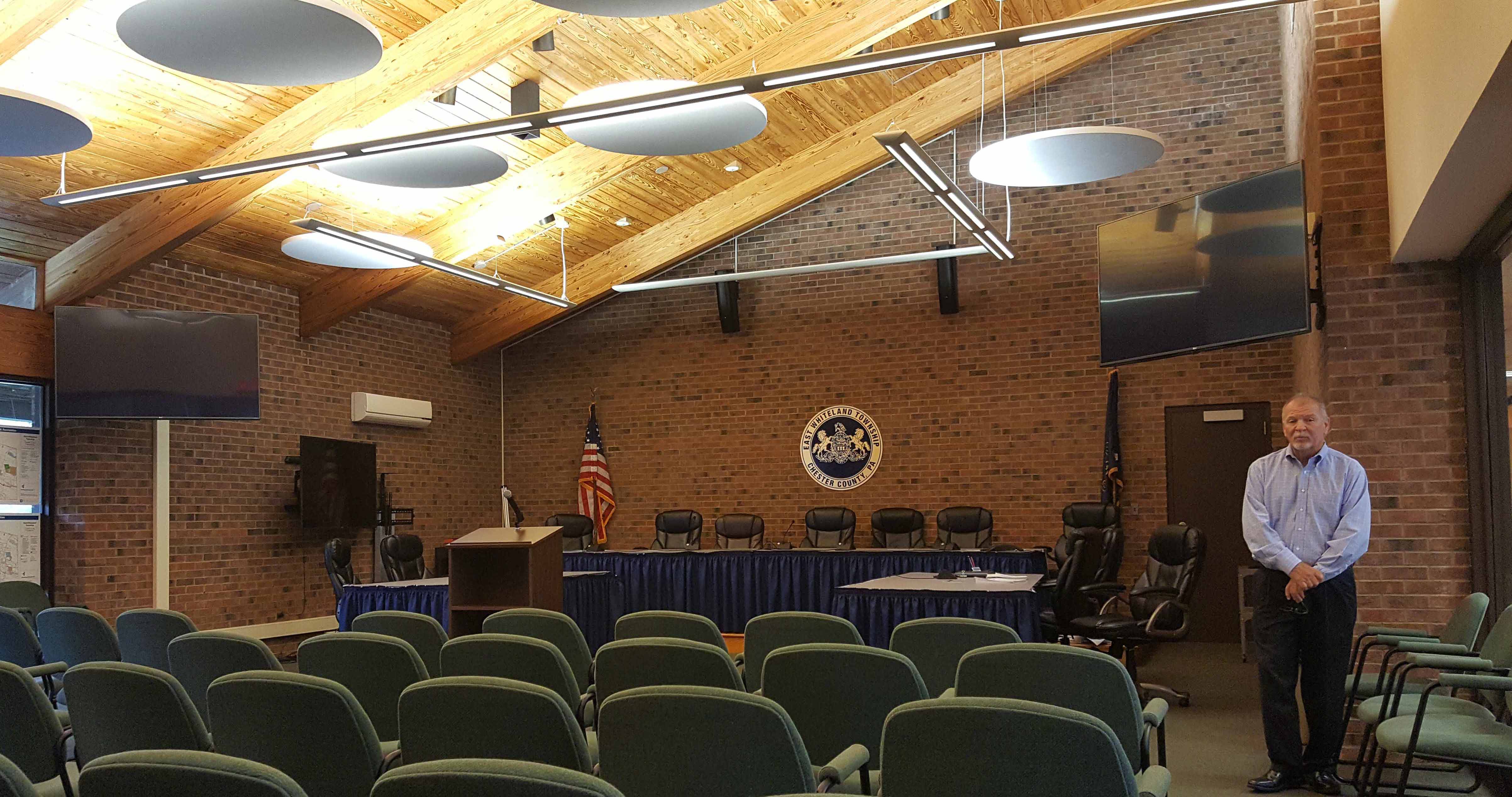 Bob Floyd, Clerk of the Works for East Whiteland Township. The simple solution won over even the most ardent of doubters.

The absorbers which are now closer to the conversation than the high, hard wood ceiling work with the paneled gypsum wall in the rear to deaden and muffle the sounds in the room and cut down on reverberation time. The results were noticeable and the feedback, even from the projects’ toughest critics, was positive.

“From day one, in my opinion, it went really well,” said Bob Floyd, Clerk of the Works for East Whiteland Township. “It even got the support of the historical society.”

Scientists, being scientists however, were not satisfied with a great install and a satisfied client. They needed numbers to back up what the township was hearing.

“We went back a month later and reran all the numbers again,” says Gatland, “and I think they tell a good story.”

The reverberation time in the room improved over 11% while, the speech transmission index went from a rating of fair to a rating of good for nearly every location in the room tested.

Strong results considering the limitations of install and a lesson for building managers everywhere.

“Perhaps the best part of this solution is its simplicity,” says Gatland, “This is something that is attainable for nearly every municipality out there with a noise problem.”

Have questions about the acoustical solutions available to your group or organization? We can help. Give us a call.

Plus, wish there was an easy way to compare soundproofing solutions before you launch a costly remodel? Now there is and more ways CertainTeed strives to give back.