On October 15, 2015, we opened our new state-of-the-art North American headquarters in Malvern, Pennsylvania – and it was a big deal. There were media, balloons, public tours – the whole nine. It felt like we had leapt forward from a previous era. You see, our prior location in Valley Forge had seen many and better days and our employees were ready, eager, and worthy of something new.

However, before we got to this day, Saint-Gobain, CertainTeed’s parent company, had a little condition for green-lighting the project. Before they would agree, we had to commit to developing an “iconic building of world-class performance.” We committed, then tried to figure out what that meant.

CertainTeed opened the doors to its new headquarters in October 2015.

After much discussion, we agreed that to meet Saint-Gobain’s expectations we’d have to succeed on three levels.

This took some serious thought, because there wasn’t an accrediting body in place to measure how all these design decisions would affect the productivity, performance and health of the building’s occupants in addition to the environmental impacts. (Since this project’s start, WELL certifications have gained greater acceptance but there remains limited guidance on how to compare occupants and their performance to the environment itself. Where as WELL focuses on the people and LEED focuses largely on the environment, we were attempting to measure both and match them up.)

In order to understand this, we would need to measure both the existing building and the people as they performed in it and the new building and how, if at all, occupant performance changed. The people and their jobs were the constant: this time around, the buildings were the variable.

How the Building Affects the People

Ultimately we wanted to know where are the best investment areas for productivity, satisfaction, comfort?

Speaking for the building scientists in the room, we were psyched. This meant breaking out all the equipment. The world had finally come to us. We were going to measure air quality, thermal comfort, visual comfort, acoustics, as well as overall satisfaction, productivity, and the health and well-being of the occupants. What we really wanted was to dive deeper into the relationships between people and their environment. If we could correlate changes in environmental conditions with changes in our people’s experience, we could get to the really good stuff. We could get to the knowledge that could be applied to buildings everywhere. “If you get in this range – you can expect these results.” 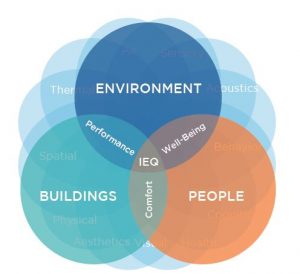 And if we could get there, we could empower architects to make informed decisions. Which things are worth the investment, and which things are not. Controlling temperature swings, for example, can get quite expensive. If we can determine what effect that swing is going to have on productivity or happiness, we can then determine whether the gain or loss is worth the cost of the solution.

Ultimately we wanted to know, where are the best investment areas? Spoiler alert. We’re not all the way there yet. That’s going to take a few more years of research but we’re getting closer. We have some theories we are in the process of testing. In the meantime, I would like to leave you with some key takeaways from this round of research and invite you to join me June 25 for a one-hour webinar where we’ll discuss the human and business impacts of moving a corporation from an outdated and inefficient facility to a state-of-the-art building designed with the occupant in mind.

For more findings from the Occupant Comfort Study and a closer look at how we set up the research project and maintained an active design, build and office environment through it all, join our Building Healthy Buildings webinar, June 25.

Plus, solving its noise problem helps a township get back to work and 3 questions to ask before you tackle an acoustical problem.