Saint-Gobain North America’s Sustainability Network held its 4th annual Summit last month. The three-day event was split between the Saint-Gobain Crystals facility in Milford, NH and the Schneider Electric R&D Center in Andover, MA. After touring both facilities and participating in a variety of waste, water and energy-themed projects and presentations, nine Saint-Gobain facilities, including four CertainTeed plants, were recognized for applying innovative excellence to environmental practices.

President & CEO Mark Rayfield, complete with sustainability cape, personally awarded winners with a WWE belt, which represents one of Saint-Gobain’s 2025 environmental goals of Water, Waste and Energy. When the three-day conference concluded, representatives from CertainTeed plants returned to their respective cities as environmental champions, awarded in the categories of Waste, Carbon, Water Project and Energy Project.

Represented by Quality & Process Control Manager Ronald Allan Perry CertainTeed Gypsum in Winnipeg, Alberta, CA took home the title of Waste Champion. The plant used aggressive trommeling implementation to separate gypsum from the paper after which they were able to reuse the gypsum. Using the process the plant was able to reuse 600 tons of material in a six month period.

From Norwood, Massachusetts, CertainTeed Roofing received the Carbon Champion award. They reduced their carbon intensity by 20% from 2016-2018 through a series of energy efficiency projects from LED lighting upgrades to optimizing cooling towers and compressed air usage. 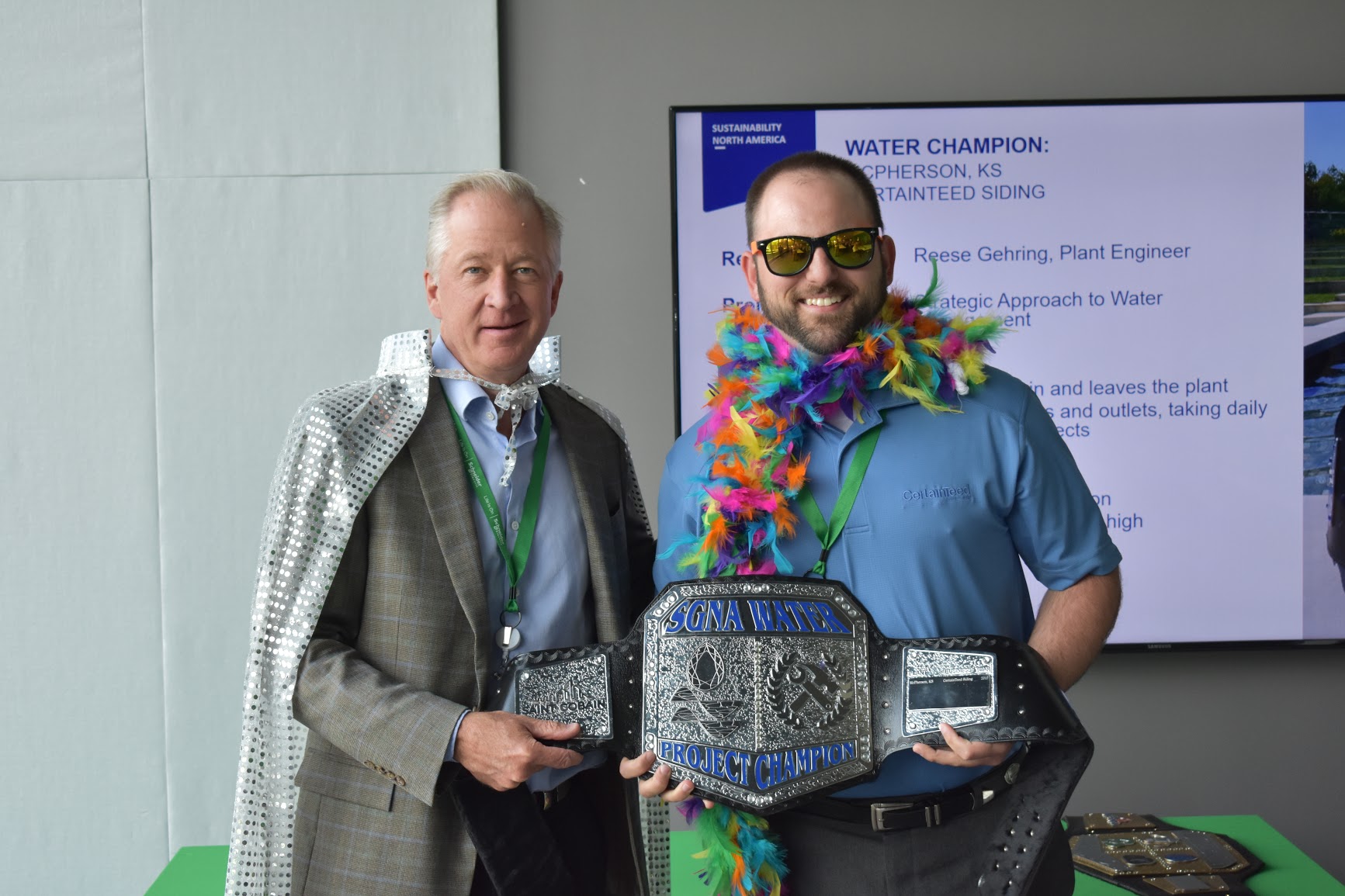 Also recognized was CertainTeed Siding’s McPherson, KS plant for their project titled, “Strategic Approach to Water Management,” proving some of the best ideas are the simplest. The goal of the project was to better understand exactly how water comes in and leaves the plant. By installing water meters on all inlets and outlets the plant is now able to track daily water usage and make constant improvements including identifying and closing a still-active decommissioned line, identifying and fixing leaks, and lowering water tank levels.

And finally, in Carrollton, Kentucky the CertainTeed Gypsum plant reduced their energy use by 146 cfm, The energy cutting measures saved the plant $10,000 annually and earned the facility the title of energy champion. The reductions were achieved by carefully eliminating leaks in the pneumatic systems. To do this the plant assigned a team to search for and fix leaks in the systems. To help speed up the identification of leaks, the team installed an alarm system to notify them when excessive amounts of air were being used.

Plus, CertainTeed plants aren’t the only ones pushing the limits of environmental design, learn how the corporate headquarters literally became a study in sustainable design.